Get Matched To
Medical & Nursing Programs 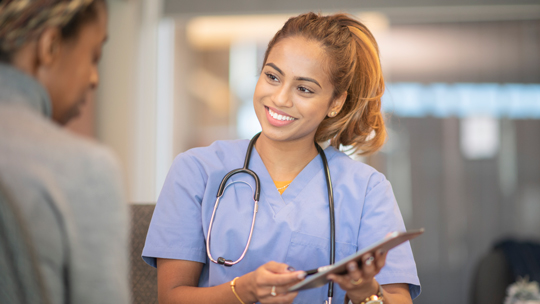 Get matched with a Nursing Program

Using relocation to turn a dream into reality

The dream of becoming a nurse to help people is a universal desire shared by nurses. What it takes to turn that dream into reality varies by individual. Each of us is unique, encountering our own set of challenges along the way to a career. Problems range from little bumps in the road to hills or even mountains.

Challenges come from various places like fears, events, academics, location, family, and many more. Maybe you have always had a fear of needles, because of an incident earlier in life. Or it could be that you struggle with not being able to help someone suffering in pain. For one aspiring nurse, Ingrid Duarte, challenges came even before she applied for nursing school. To make her dream a reality, she had to overcome both her family scared by Covid-19 and living in California.

Ingrid Duarte grew up in California with her mother and six siblings. Over the years, her mother repeatedly told her children, “To help others and make her contribution to society,” according to Duarte. “Be kind to people.” Her mother also served as a role model, exhibiting determination, and hard work. “She worked, went to school to get her teaching degree, and took care of us,” Duarte said.

Duarte’s upbringing has been influential throughout her life. “I have always known I wanted to help people since I was young,” Duarte said. “I remember hearing stories from my parents about their childhood.” Her parents came from humble beginnings, where they didn’t always have the best access to healthcare. “Since then I just knew I wanted to be a part of that change in my community,” Duarte said. Inspiration on how to help people came from her mother’s health issues, including diabetes and high blood pressure. The final trigger was a stroke. “My mom having a stroke in 2019 solidified nursing for me,” according to Duarte.

Duarte started working toward her dream of becoming a nurse in California. But it was a nightmare. It seemed just about everyone over the age of 17 was trying to be accepted by nursing schools. The fierce competition made it seem nearly impossible. She thought there had to be another way and started looking for other options.

She liked the idea of relocating for nursing school. While she pondered what to do, her boyfriend relocated to the Phoenix area for a job. Soon after, Duarte’s boyfriend began trying to persuade her to move there too. Duarte remembers thinking, “Arizona is a state away from California, not as crowded, and things are slower.” Duarte also thought she would have a better chance of getting into nursing school.

Duarte decided she would move to Phoenix. She then convinced her sister and sister’s boyfriend to help. Together, they packed up her little two-door car, and Duarte went to say goodbye to her mother. The goodbye became more than she expected. “My mom didn’t believe I was going and did not want to say goodbye,” Duarte said. It took a while for her mother to accept it, all while questioning her daughter’s decision, and then they were off!

They arrived in Phoenix tired after the long drive, yet excited. Duarte felt the move would make it possible for her to become a nurse. She started settling in, looking for a job, and found one at a bank. Duarte also began taking classes in preparation for a nursing program. She earned a general associate degree, along with completing nursing school prerequisites. Shortly after that, she started looking at nursing programs.

“I wanted it (nursing program) to be something educational, but not just books and theory,” according to Duarte. “I want it to be real life, and see nursing practices in real life, not just something out of a textbook.” She liked what she saw at Arizona State University’s Edson College of Nursing and Health Innovation and applied.

I never thought I would see a pandemic in my lifetime

Nursing school acceptance came in February of this year; at the same time, Covid-19 came onto the news scene. Despite the pandemic news, “I knew this was what I wanted,” Duarte said. “I never thought in my lifetime I would see a pandemic, or I could tell my kids this is what I saw.”  After contacting her mother with the good news about acceptance, her decision was once again challenged. “I remember my mom texting me the day I got into nursing school asking me ‘Are you sure, have you heard everything about Covid-19?’,” Duarte said. “There was no turning back.”

Since then, she has started nursing school and had only a few eye-opening experiences rather than challenges. One of them relates to her fellow students. “I was surprised by so many out of high school, and a lot of older people too who have been doing their career for 5, 10 years,” Duarte said. She also said it’s disappointing that most classes will continue to be online. “We were supposed to start in August, but now it will be all online with a small group for clinicals,” according to Duarte.

As for the coming months, she looks forward to trying all nursing specialties, especially obstetrics and pediatrics, and will decide after they are completed. Right now, she is interested in preventative care, wellness programs, to recovery. There is plenty of time to decide with her graduation planned for August of 2022. Duarte will graduate with an Associate Degree Nursing (ADN) from a community college, and Bachelor of Science Nursing (BSN) from Edson College. “Someday I’d also like to do some humanitarian work as a nurse in different states or countries,” Duarte said.

Advance Your Career With a Wound Care Certification

Based on decades of experience, Vohra’s team of specialty wound care physicians developed this practical wound education to help you accelerate your nursing career and deliver better care, regardless of clinical setting. This educational program provides the training needed to properly care for wounds in the geriatric population. Vohra’s physicians know that knowledge, skill and proper training are critical to achieving superior clinical results. We believe every patient, family, nurse, and caregiver can be empowered through education. Hundreds of thousands of people have already benefited from this course and the knowledge we have shared.

The program is offered exclusively online and consists of 11 core modules, 2 bonus modules, individual quizzes, downloadable study guides, and a final exam. The Vohra Wound Care Course is nationally recognized, it is self-paced, and it is the most widely used and least expensive path to wound care certification nationwide.

Use promo code ASPIRING50 to save $50

The CNE credits earned through the program are approved by the Maryland Nurses Association (MNA) and recognized by the American Nurses Credentialing Center (ANCC). The ANCC accreditation signifies that educational activities approved by MNA meet national standards for quality continuing nursing education. Having said that, please note that the state licensing boards of California and Iowa have some exceptions to their acceptance.

Who can earn a Certification from Vohra?

Nurses with a Wound Care Certification can assist physicians and also treat wounds directly, improving patient outcomes significantly. Not only do trained wound nurses help improve patient quality of life, they help nursing facilities and home health agencies minimize the risk of citations and infractions for pressure ulcers. Patients under the care of a certified wound nurse rarely need to leave their regular place of treatment to visit wound care centers or hospitals, where such trips often overexert the patient and are expensive for the facility and payor. Additionally, wound training improves patient outcomes and quality of life, and minimizes the need for costly and often traumatic wound treatment in the long-term. For these reasons and countless others, nurses certified in wound care are a valuable asset to any patient care team.

More information about the company and instructors are here: https://cert.vohrawoundcare.com/about-us/

Compensation may impact where the Sponsored Schools appear on our websites, including whether they appear as a match through our education matching services tool, the order in which they appear in a listing, and/or their ranking. Our websites do not provide, nor are they intended to provide, a comprehensive list of all schools (a) in the United States (b) located in a specific geographic area or (c) that offer a particular program of study. By providing information or agreeing to be contacted by a Sponsored School, you are in no way obligated to apply to or enroll with the school.

Your trust is our priority. We at Aspiring Nurse believe you should make decisions about your education with confidence. That's why Aspiring Nurse is also proud to offer free information on its websites, which has been used by millions of prospective students to explore their education goals and interests.

We will collect your contact information to respond to your requests for information and provide you with educational matching services. As a result, you may be matched to one or more sponsored schools from which we receive compensation. Compensation may impact where Sponsored Schools appear on our websites. We use cookies and other tracking technologies to collect your personal information in order to gauge online activity on our website, measure the effectiveness of online services, applications, and tools. For more information, see our privacy policy.